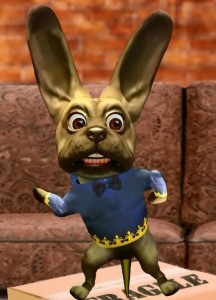 Position: Ace reporter and news journalist. (Even we are not sure what the difference is.)

About Jack Rabbit: He is an intrepid reporter who is not afraid to dig into any hole, or burrow through any underground maze to unearth the Truth behind a story. Unfortunately, because of his ears, he is limited to staying out in the open, or, if he goes indoors, the rooms must have high ceilings.  Also he’s short, so those big-ass ears make him look even more ridiculous. Don’t know why we added that, but he’ll never know, cuz he can’t reach up to see the computer screens! Yuk, yuk!